A thought of wonder

"It is worth a lot to become more aware of our relationship with 'time'. Especially with what it costs to be so attached to using our time in the most efficient way." (In Dutch: Het is de moeite waard ons bewust te zijn van onze relatie met tijd, vooral van wat het ons kost om te veel gehecht te zijn aan efficiënt tijdgebruik.)

I read this sentence this week on the lovely site from Flow-Magazine. (Love the magazine and all the stuff they make!). Anyway: the sentence struck me, because I have to admit that inside of me there is this 'person'. I guess it's a She. She's kinda nice, but also kinda strict. She's pretty concerned with how other people think of her. She is especially outspoken about how the household needs to be done. How tidy it must be, how clean and all. How I can use my time very efficiently!

My grandmother knew her well, my mother knows her very well, and my stepmother doesn't know who she is apart from her. So it is not just a genetic thing, probably a lot has to do with upbringing. But she is here sometimes, looking a bit like this:

But often I try and find myself to be like this:

Even though I worry quiet often: "do I spend enough time with my children? Is my daughter infected with the household virus by now or do I have some time left to change things around? What do I want to teach her when growing up? What does she see when she looks at me?" Both my daughters can play very well on their own.
On the one hand, I see this as a good thing. They feel comfortable with themselves and can concentrate easily and always find something to do, even if it is just moving their hands through the sand watching the clouds. (Mmmm, can you remember what that felt like when you were little? It felt so good, those endless days and skies.).
On the other hand I wonder whether they withdraw in their own world, cuz mommy is busy cleaning. Like this afternoon: my (almost) 4 year old and I just played one game. This made me feel guilty. I do try to draw her into helping me. This afternoon it worked well, because she wants to be Cinderella when she grows up. "And Cinderella cleaned a lot before she met her prince!" Honestly her words, not mine!

It is hard for me to keep calm. To notice the 'voice' inside of me and accept her. Not to be mistaken with agreement. I find myself sometimes literally talking to 'her'. "I hear you, and yes it is a mess, and yes my mother would never have such a household, but I am not my mother, and I try to be more 'in the moment' and play with my children." Slowly and reluctantly she accepts my arguments. She is relaxing a bit every now and then. But God, this process is hard!!!!

So what does it cost me? The need for efficiency?
I will remind myself of this the next couple of weeks. So that I, my daughters and 'her' can all kick back and relax and have a good laugh!
Gepost door Miss M. op 8/13/2010 2 opmerkingen:

The first step on my new journey

Just a few minutes ago I send in my application for the ZKM-coach training! Wow! I did it! It has been a dream of mine to start with some kind of education in the field of the inner journey of people. God, this feels so good!

These past days I have been reading a book about Narrative Therapy from Michael White. Also very inspiring!
Oh well, not much to say, there are more feelings than words at the moment! But I will write about it soon and will let you in on (part of) the journey that I will travel.
Gepost door Miss M. op 8/12/2010 2 opmerkingen: 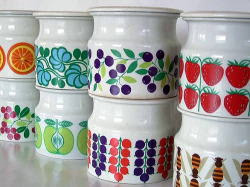 My Arabia Pomona series that remind me of my grandparents everyday. They had three of these jars: a strawberry one, a blueberry one (the one you see in the middle) and the one with the bees you see on the lower right side. They used to keep all different kinds of 'Hagelslag' in them. 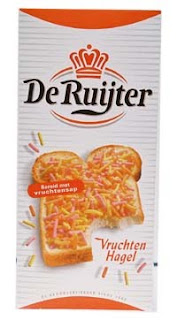 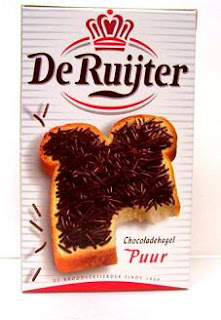 Dark pure chocolate, colorful sugar sprinkles and the white anise version. (My favorite) They had all the jars, together with lots of other stuff to put on our bread, on this large tray that you could spin around. It was like that for years and years and forever etched in my memory. Together with eating our bread from the yellow plates.

A few years before they died, they started asking what we, the grandchildren, wanted to have once they had passed. Without hesitation I mentioned the jars. Years later my grandmother, who lived alone by then, had cleaned them and packed them for me one day. They were waiting for me at the dinner table. I could tell that for her it was hard to say goodbye to them. Saying goodbye to one of many traditions. But for me it was wonderful to receive them directly from her. 'Thanks so much grandma!'

After she passed it took me a while to found out the name of the jars and the series. But once I found them I decided to collect them and now, almost two years later the series is complete. By the way I do not collect the jugs, mugs, plates etc. For those of you interested, I got mine all from Marktplaats. A Dutch kind of E-bay/Craigslist.

The jars represent very fond memories of the past and their 60's patterns are cheerful and fun to watch everyday.
Gepost door Miss M. op 8/03/2010 1 opmerking:

Miss M.
Wife to Mister M, mother of M (2006-2017) who passed away due to complications of Acute Lymphoblastic Leukemea which had spread through her brain causing bleedings. Daughter E. was born in July 2009. Sudden Cardiac Arrest (2010), Breastcancer (2013 - surgery + radiation), Breastcancer (2018 - mastectomy + chemo)